The False Prince by Jennifer A. Nielsen 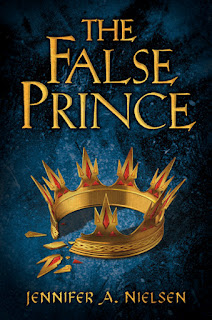 Defiant. Streetwise. Devious.
Growing up in an orphanage has brought out the bad boy in Sage.

War is brewing in the kingdom. Connor, a nobleman of the court, devises a cunning plan to find an impersonator of the king's long-lost son and install him on the throne. Four orphans, including Sage, are recruited to compete for the role. Sage knows that Connor's motives are questionable, yet his life balances on a sword's point - he must be chosen to play the prince or he will certainly be killed. But Sage's rivals have their own agendas as well, and as Sage moves from the rundown orphanage to Connor's sumptuous palace, layer upon layer of treachery and deceit unfold. Finally, a truth is revealed that may very well prove more dangerous than all of the lies taken together!

~summary from the back of the paperback copy of the book, bought from Barnes & Noble.

What I liked:
There is a lot to like about this book. The characters for one - Sage is clever and tricky. It would've been easy to make Sage get into trouble by getting framed by the other boys, but instead he gets into trouble from his own actions. The other two boys, Tobias and Roden, are each unique and seemingly "better" than him in some way. For example, Tobias has had some education, so  he is considered the smartest. Roden is the strongest. Together, they form uneasy lines and friendships, which are woven together into a complicated love/hate relationship among all three.

Another likeable part is the dramatic tension. When Connor kills the fourth boy, Latamer, early in their dealings, the boys instantly know that Connor is deadly serious. The reality of their situation haunts their steps and actions as the story progresses. As Sage continues to get into trouble, you can feel the tension drag away from the other boys while the character you're rooting for, Sage, is heaped with it. Will he be chosen, or will he die? As the main character we expect that he will, but the book's twists and turns leaves you truly unsure of whether or not he will live.

Pretty much just the worldbuilding. We know the names of several countries and a couple of places, but we don't get the full force of culture. Their country may be on the brink of war, but we get little insight past the instruction of the boys and Connor's own palace walls.

Overall, I love this book. There was little to hate. I know there's been praise upon praise heaped onto the book, but it deserves it. Sage's cleverness reminds me Artemis Fowl (the series listed first over there under my list of favorite books)